The Emotional Grind for First Responders 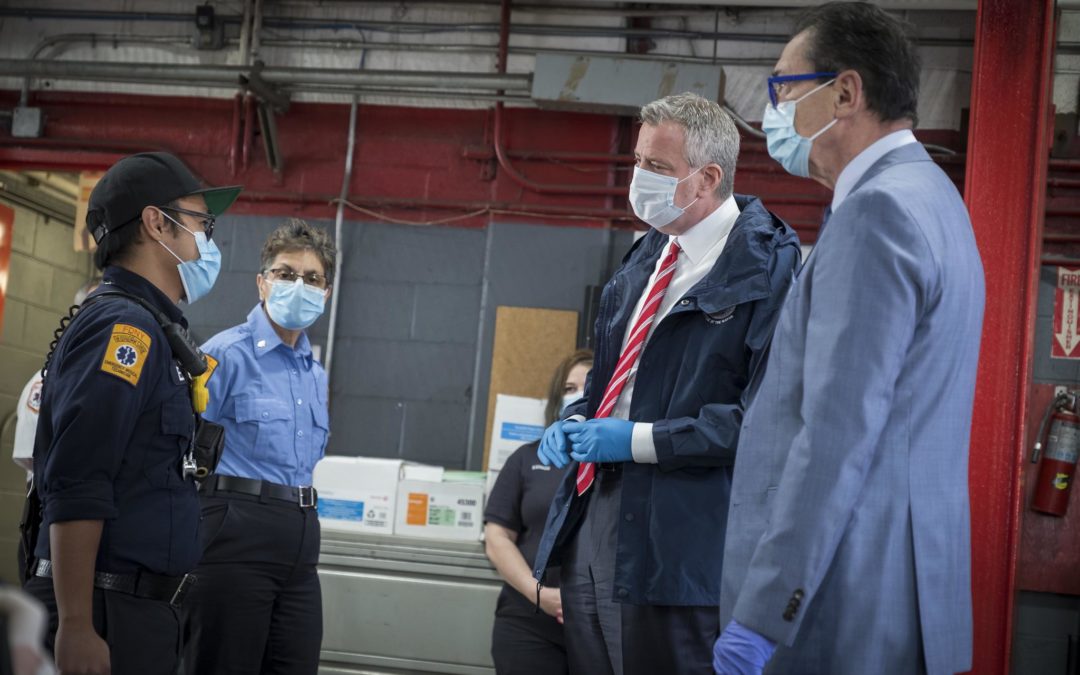 For Annie Wilson, a paramedic based in South Florida, COVID-19 was the final push that led her to take a leave of absence in early April.

Wilson, who worked for a private ambulance company, noticed the uptick in call volume as the pandemic began to sweep through the country. She was going on ambulance rides across the state, trying to stay alert with energy drinks and caffeine pills, and was unsure whether the patients she’d be responding to had COVID-19.

In addition to feeling a lack of direction on how to handle coronavirus calls, Wilson was increasingly anxious about the prospect of carrying the virus to her girlfriend and her girlfriend’s family.

“We didn’t know what we’d be walking into, let alone if the patient had COVID symptoms,” said Wilson. “It was always a gamble.”

During the peak of the pandemic, EMTs, firefighters and paramedics were dispatched on an unprecedented number of emergency runs. Even as calls for some agencies have dipped, the virus continues to take an emotional toll on first responders. Some mental-health experts anticipate residual impacts when the initial crisis dies down and states brace for a potential second wave of COVID-19.

“The extent of the emotional toll of the pandemic is astronomical,” said Sean Riley, the president and founder of Safe Call Now, a confidential, crisis-referral hotline for emergency personnel and their families.

The increase in call volume to Safe Call Now during the pandemic is “off the charts,” according to Riley, who declined to provide exact numbers.

Call volume to emergency medical services in some states saw a sharp increase, followed by a decline. New York City’s Fire Department, for example, fielded an average of 4,100 daily calls last year. When the pandemic hit, the department saw that number increase by as much as 50 percent, Deputy Commissioner Frank Dwyer said in an email. By early May, the volume fell to last year’s average.

Some states, however, are still seeing an increase in COVID-19 cases.

“We are not out of the woods yet,” said Oren Barzilay, president of FDNY Local 2507 Union, who said that while early April saw huge surges in calls, some of his members are still reporting an increase in cardiac-arrest calls. Researchers found a similar trend in the Lombardy region of Italy, which saw a surge in out-of-hospital cardiac arrests during the height of the pandemic.

“When you go from doing one cardiac-arrest call per day to six or seven, and some members have even reported more, it’s bound to impact you,” said Barzilay.

In late April, a Bronx EMT John Mondello died by suicide. He was exposed to the coronavirus on a daily basis, according to Barzilay.

Effects Are Hard to Calculate

Experts say that the emotional impact of the pandemic is difficult to measure and is influenced by many factors, including a first responder’s access to PPE, their social support network and how they tend to cope with stress on the job.

There is also wide variability in access to resources across agencies, which can impact a first responder’s sense of safety. “Do they work for an agency that is well-funded, with a stockpile of PPE? Or a small volunteer agency that doesn’t have a huge budget? ” said Ann Marie Farina, director of the Code Green Campaign, a first-responder mental health advocacy and education organization, said that before the pandemic.

“Coming into this with PTSD to begin with, and then re-exposing myself to more potential trauma, it got to the point where I was like, do I want to continue to show up and be exposed and put my health at risk?” Wilson said.

Kai Kincheloe, a firefighter in Arizona, said that while his department was able to secure sufficient protective equipment and put COVID-19 policies in place early on, the virus presents additional layers of difficulty.

“With most of the stuff we deal with, the overall impact is fairly contained,” he said when the pandemic was ramping up. “A car accident, for example, is going to impact maybe up to eight people and a few of those people might have a serious outcome. But this is the whole world.”

A.J. Cocetti, a firefighter and paramedic in Denver, Colorado, said that when the pandemic was peaking, his department only sent one paramedic into the house when responding to a potential COVID-19 patient, to minimize exposure. Now, he said, how they respond to COVID-19 calls varies case by case.

“We signed up because we want to help people, and it’s weird when only one person can take care of a patient. You don’t feel like you’re as hands-on as usual, because you just can’t be,” Cocetti said.

Before the pandemic, the general goal was to maximize the treatment that first responders could do in the field. Yet during the peak of the pandemic, Farina said, EMTs were encouraged “to just get the patient to the hospital.”

“One of the things that really affects people is when you know how to help someone and you can’t do it for whatever reason,” she said.

The need to isolate after potential exposure to COVID-19 also makes it difficult for many first responders to lean on support at home. The threat of infecting family members creates added stress.

Cocetti, who lives with his wife, said bringing the virus home is a constant worry for him and his colleagues.

“They may not even know if they have the virus,” said Cocetti. “That’s kind of a lot to bring home.”

In addition to the current challenges of fighting COVID-19, there could be lingering impact on first responders after the crisis subsides, according to Mark Lamplugh, a former Pennsylvania fire-company captain and president of the Institute for Responder Wellness.

Chronic stressful events like a pandemic can also exacerbate burnout that a first responder might already be dealing with, said Lamplugh, who saw his online first responder support group grow in members during the pandemic.

“When the crisis is happening, we can do our jobs. Our bodies are stressed, we are sleep deprived and drinking loads of coffee, but we do the job,” said Lamplugh. “The effects of this stuff can happen months or years later when there are trauma-related issues because of the things you’ve seen.” Lamplugh has seen many first responders turn to drugs and alcohol to cope, long after a traumatic event has passed.

What helps many cope

Farina compared COVID-19 to “a mass-casualty incident.” She suspects that rates of PTSD will increase after the crisis subsides.

“We’ve seen how after big disasters, people tend to really pull together, and there tends to be more social support,” she said. Research has shown how social support is a key tool in mitigating the effects of trauma.

The psychological impacts of the pandemic could vary greatly among first responders, according to Patricia Tritt, the director of instruction for Colorado’s American Medical Response, a medical transportation provider.

“Some people with high doses of stress don’t develop post-traumatic stress injuries and some do, and as human beings we all cope differently,” said Tritt, who has coordinated crisis and trauma response services for years.

Jess Waltenburg, who works for Colorado River Fire Rescue, has seen a push in her department to have mental-health resources in place, even before the onslaught of the pandemic. It’s a big deal, she said, in a field where there has long been a “tough guy attitude.”

“Everybody is doing the best they can,” she said. “Our chiefs are awesome. Never once have they set this expectation of ‘You’re gonna go on the call no matter what.”

Waltenburg and her colleagues have access to support groups led by trained peers. Waltenburg also has group text chats with coworkers in which they can “blow off steam” or send each other pictures of their kids and families.

Cocetti also thinks that peer support will be key in combating the stigma against seeking help after a traumatic incident.

“The history of the mentality of firefighting has been to pull up your bootstraps and keep chugging,” he said. “And it shows in the rates of suicide of first responders.”

During her leave of absence, Wilson decided to create a grassroots movement called Both Sides of the Stretcher, with the goal of reducing stigma and providing a space for first responders to talk about the emotional toll of their work.

“There’s not that level of comfortability and openness where you can be like, ’Look, I’m really struggling, I’m really anxious about this COVID stuff and it’s taking a toll on my mental health,’” she said.

Wilson developed the website and a private Facebook group for fellow first responders to discuss their emotions.

“If people felt safe enough to have those discussions, I think it would ultimately save lives,” she said.