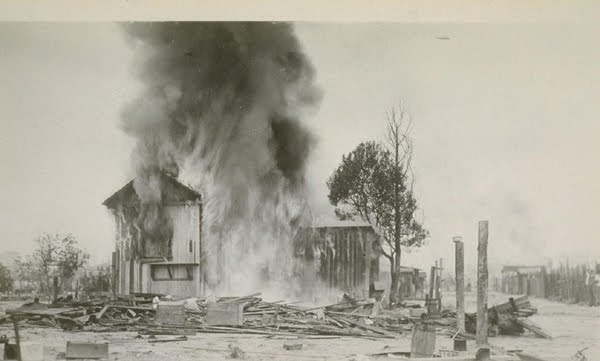 Los Angeles, the golden city. Home to warm sunshine, endless possibility and, in 1924, the Black Death.

Though that outbreak killed fewer than 40 Angelenos, the COVID-19 pandemic today echoes some of the darkest elements of the legacy of the city’s brush with plague—including institutional racism, public-health decisions driven by economics and government messaging that minimized the true danger.

“I certainly can see some parallels, one hundred years since, in today’s world,” said William Deverell, a historian of the American West and professor at the University of Southern California, whose book Whitewashed: The Rise of Los Angeles and the Remaking of Its Mexican Past includes a chapter on the plague.

The pneumonic plague is caused by a form of the bacterium Yersinia pestis, which is also linked to pneumonic plague’s better-known sibling: bubonic plague. In 1924, after a rat died underneath the downtown Los Angeles home of 51-year-old Jesús Lujan, the pathogen is thought to have transferred to him when he threw the rat away. It then rapidly killed his family and 29 others.

This sinister medieval illness stood in stark contrast to Los Angeles’ clean, healthful image in the early 20th century. Earlier cases of the plague had appeared in San Francisco around 1900 after arriving on rat-infested steamships. Cases also began to appear in other port cities, but decades passed before the plague reached Los Angeles.

Los Angeles officials contained the epidemic swiftly. They built an isolation ward in the Los Angeles General Hospital within a month of Lujan’s infection. Healthcare workers wore gowns and gauze masks when treating the ward’s patients, who complained of cough, chest pains, backache and fever.

Officials used contact tracing to cut off the illness. A militarized quarantine zone was set up in the predominantly Mexican neighborhood where Lujan had lived. No one was allowed in or out. According to Deverell’s book, health officials even intercepted visitors from New Mexico at the train station, en route to visit cousins who had attended one of the first funerals associated with the outbreak. The officials warned them to stay away from 742 Clara St., the house that had become the center of the epidemic.

The U.S. response to COVID-19—a very different and previously unknown virus—was comparatively glacial. Quarantining took weeks to implement, despite the fact that the epidemic had unfolded in China for weeks. Contact tracing began in earnest with the first Westchester County man diagnosed with COVID-19, but a New Rochelle quarantine zone failed to stop the spread.

“So they certainly jumped on it,” Deverell said of the 1924 response by Los Angeles officials. “And I think one of the differences is COVID-19 has been cooking on the stove, as it were, for a long time before it was getting recognized.”

The Trump administration’s initial denial of the disease’s danger echoes local attempts to quash reports of the 1924 plague.

Back then, city health officials, well aware of the risk at hand, worked together to suppress information in order to maintain the city’s image and protect the economy.

“There is no disease known that has such an effect upon the business world as plague,” Walter Dickie, secretary of the California Board of Health, said in a meeting where the mayor was present, according to a 1974 article in the Yale Journal of Biology and Medicine. The Los Angeles Chamber of Commerce redoubled efforts to promote the city to tourists and investors. The Los Angeles newspapers, Deverell writes, were quick to follow suit, promising they would print nothing that wasn’t “in the interest of the city.”

The response to the outbreak also revealed an ugly undercurrent in white Angelos’ thinking: their view of Mexican people as subhuman. Part of the swift containment of the plague may have, perversely, been helped by the racism that fueled the aggressive quarantine and restrictions. The cost to the local community was high.

In the name of stamping out the rat problem, demolition crews tore down shacks, burned structures and removed sideboards from houses, destroying 2,500 buildings deemed public nuisances. They killed thousands and thousands of rats. These measures also functioned conveniently as “urban renewal.” Little remuneration was given to the mostly Mexican owners of the destroyed properties.

The disease quickly became equated with Mexican ethnicity itself. According to Deverall’s research, Dickie went so far as to suggest “a general rule to autopsy all Mexicans that die of acute illness and are suspicious.” Mexicans living and working outside of the quarantined area in Los Angeles were fired from their jobs.

“Pandemics are very fearful events and fear is very closely related to hate,” Deverell said. “I think we see reflexive responses that can reveal darker impulses in a society when pathogens are unseen and invisible. People are looking for ways to mark people to steer clear from, or people to blame.”

The urge to demonize a specific community lives on today in Donald Trump and other administration officials describing COVID-19 as being caused by the “Chinese virus.” That rhetoric came amid an increase in hate crimes targeting Asian-Americans, another marker of how darker impulses have not disappeared.

Modern American society may be better equipped medically to deal with infectious disease than in 1924. The hate that epidemics uncover may be harder to rid.