A Deadly Lesson From 1720 France 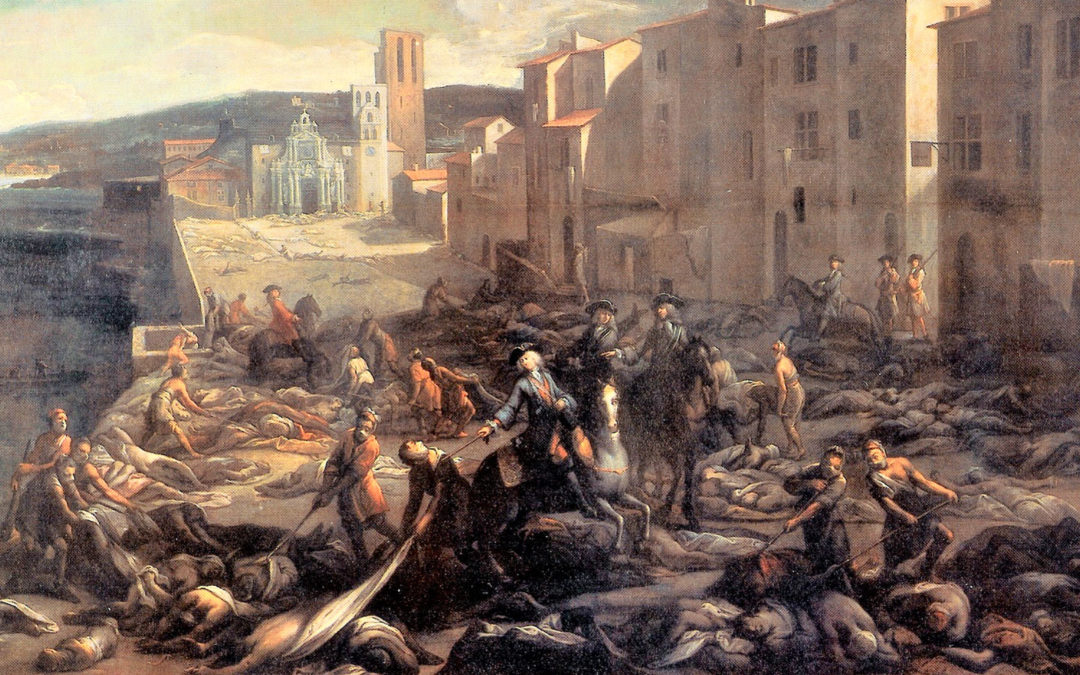 “Chevalier Roze à la Tourette” by Michel Serre, which depicts Marseille during the outbreak of pandemic in 1720.

Protesters gathering in crowded circumstances to say stay-at-home restrictions infringe on their rights might want to take note: History shows trying to return to normal too soon can be a catastrophe.

A terrible example comes from 1720, when one merchant ship undid decades of public-health policy enforcement by circumventing quarantine measures.

The result: 100,000 deaths across France in the last bubonic plague outbreak in Europe.

The 1720 Great Plague of Marseille killed 50,000 of the city’s 90,000 residents and 50,000 additional people outside it. The wave of death came after the Grand Saint-Antoine bypassed a mandatory quarantine to sell goods at Beaucaire—then the site of the largest commercial fair in southern Europe.

Merchants “had capital tied up in that particular ship, so of course they wanted it sold,” said Mary Fissell, a professor in the History of Medicine department at Johns Hopkins University.  “When you’re talking about the quarantining of goods, it’s just like today. The tension is between the overall health of the economy and the individual economic health of certain people and the larger good.”

Marseille, which had experienced outbreaks of the plague since 1347, had over the centuries developed a system of precautions, including a rigorous quarantine system that isolated incoming and returning ships in lazarets, or offshore quarantine stations, for up to six weeks.

Quarantine was not a new concept to Marseille or the rest of the 18th-century world. The Old Testament even reported how individuals with suspected leprosy were separated from society, according to a 2013 study of the plague by Christian A. Devaux of France’s National Center for Scientific Research featured in the Journal of Infection, Genetics and Evolution.

As well known as health surveillance may have been as a theory, the Great Plague of Marseille shows that lockdowns must be tightly enforced in practice.

The Grand Saint-Antoine’s evasion of quarantine was a rarity. What was not unique was how frequently Marseille citizens who wanted to use beaches and shorelines violated the prohibition of coming within 200 meters of any lazaret, according to Devaux’s study.

The ship, owned by the deputy mayor of Marseille, made an unusual and unnecessary stop on its way to quarantine.

Rather than going directly to Marseille’s most popular lazaret—the island of Jarre—the Grand Saint-Antoine first went to the lazaret of Pomegues. There, the crew unloaded its cargo including cotton and silks and transported the goods to a different lazaret before bringing the ship to its original destination of Jarre. This unusual conduct aimed to get the ship’s goods to the Beaucaire market as quickly as possible–even if that meant circumventing the surveillance measures.

Sneaking their goods past the mandatory quarantine allowed for those goods to be sold at Beaucaire–which is believed to be the source of Europe’s final bout of the plague.

“Merchants don’t tend to like quarantine because their goods are locked up for forty days,” said Fissell. “So you have individuals trying to cheat the system.”