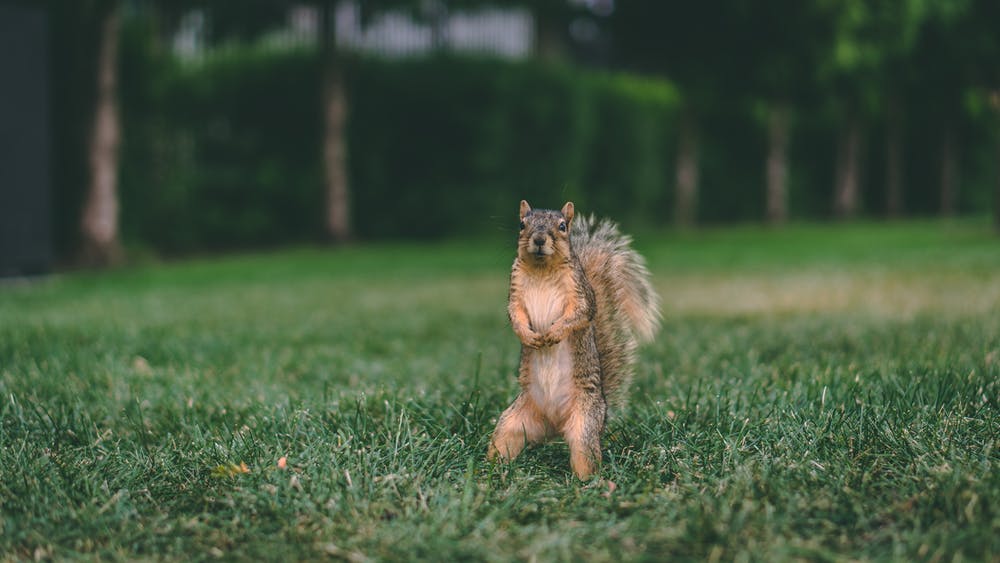 You think your quarantine is bad?

When the repairman who was fixing our ceilings called me into my roommate’s bedroom, I never expected to see a newborn baby squirrel fall from above. The tiny, pink kit’s eyes were still closed. It was covered in white dust and shredded ceiling debris while the mother stared down at us from the hole.

With the discovery of these creatures, the repairman called for backup. Twenty minutes later, his burly boss with Bluetooth earbuds arrived carrying a trap, peanut butter, wood and power tools.

Two hours later, after they cleaned up my roommate’s room, they turned to mine. My bed was upturned, placed to lean against the wall with a thick layer of sawdust on it. In the corner where the squirrel had dug a hole in the ceiling, they hung the trap, filled it with peanut butter and placed the baby squirrel in it.

They hoped that the mother would hear the baby’s squeaking or smell the food and fall into the trap.

“I would keep that door locked,” the boss said to me as he left. “The cage could come loose.”

How It All Started

For the last seven months, two squirrels had scratched holes through our ceilings. They were attempting to escape, the boss said. If they were indeed trapped up there, he didn’t know how they survived for so long.

In seven months, I got used to their fights and running around. I hated every minute of it.

I unwittingly named them after the Harry Potter characters Fred and George, the Weasley twins. While George died five months in, resulting in weeks of flies, the other continued to wreak havoc.

Two days before the repairmen showed up, the City University of New York announced that all classes would move to remote learning, leaving me quarantined with my nonhuman roommates.

Out of fear of catching any potential diseases from the baby that now sat in the corner of my room, I didn’t tend to it. I felt horrible, but I wasn’t getting sick from squirrels, COVID-19, or anything else I could manage to avoid.

And Then There Was One

When the baby squirrel died three days later, I quietly put it in a sandwich bag and placed it behind a bush outside my apartment. That night, I sent my landlord an email—my room was uninhabitable.

While some might call this exaggeration, I needed a response.

As a journalist and a concerned tenant, I took photos of everything and wrote down quotes. I would be damned if my landlord let this go.

When the repairmen arrived again the next day with power tools and a ladder, they were angry. The boss argued with my landlord on the phone and bickered with me. He didn’t see the point in moving the trap.

“These things take time,” he said. “The squirrel won’t just climb into the trap overnight.”

He begrudgingly moved the trap to the common-area ceiling and nailed a wooden board over the holes in my room.

While I reclaimed my bedroom and the holes are temporarily covered, Fred, the mother squirrel, remains at large. She continues to run around scratching. Perhaps even searching for her lost baby.

With the coronavirus raging in New York City, my roommates and I are leaving for our respective family homes—leaving Fred in charge of the apartment.