The Bachelor Trying to Date a Neighbor

by Francesca Krempa | Apr 14, 2020 | All Posts, Culture & Community, Featured, Love in the Time of Lockdown 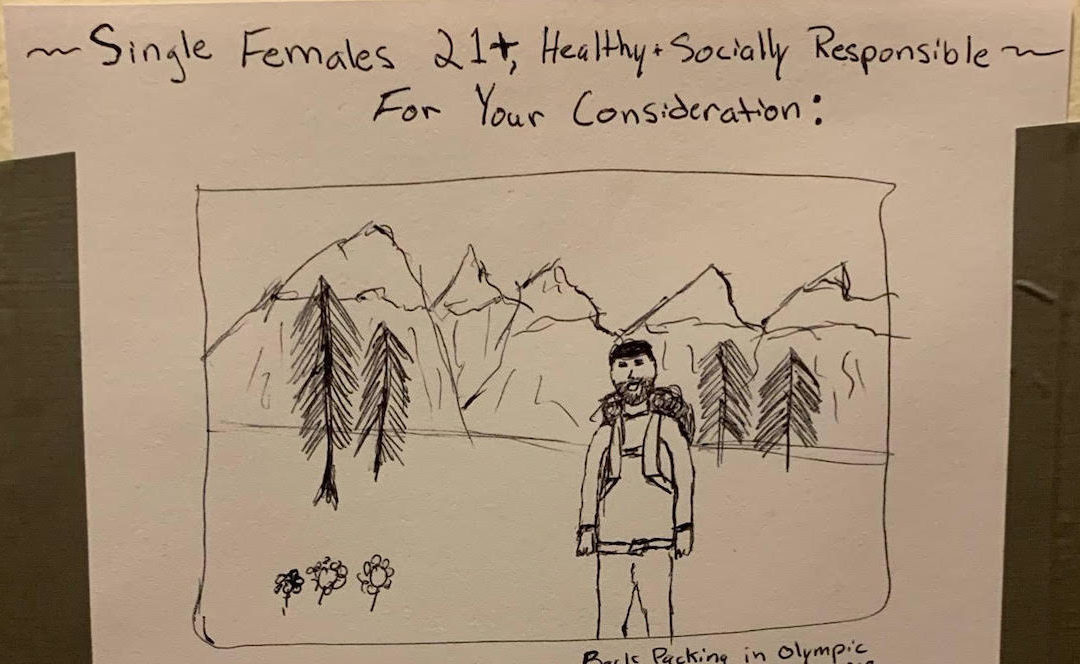 The product manager, who lives alone on the Upper East Side, has been single since November. He has been avoiding dating apps because he’s “not really looking for someone to just be texting.”

When isolation and social distancing during quarantine has made him crave face-to-face interaction, he got creative.

In late March, Vigilante made a handmade dating profile designed for display in the lobby of his building. Using a black pen and a sheet of paper, he drew a cartoon self-portrait capturing his backpacking trip in Olympic National Park in Washington state. He listed all of the essentials you’d find on a Tinder or Hinge profile: age, occupation, location and a smattering of quippy, personal facts:

“Was an anti-social germaphobe before it was cool”

“Although I’ve lived in this building for about nine months now, I don’t really know a single person,” he said. “I thought this would be a good way to put myself out there, see if anyone was interested in chatting and maybe meeting up.” 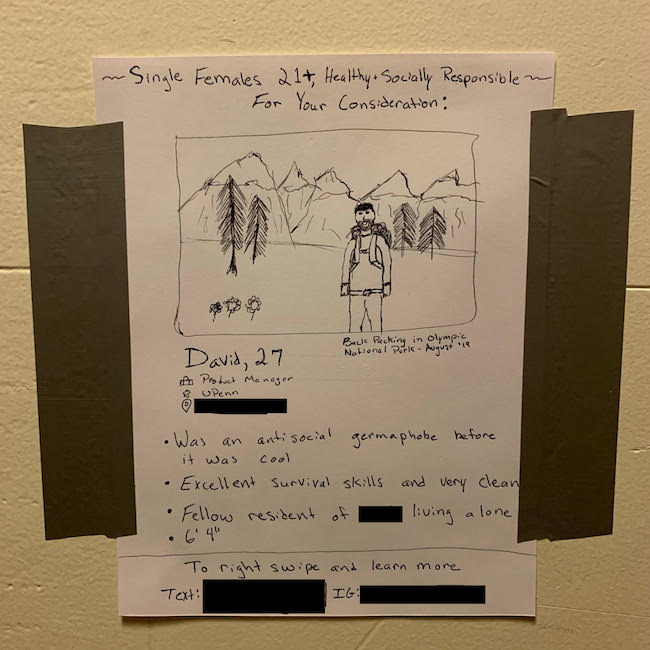 David Vigilante’s hand-drawn, wall-posted dating profile, with his contact information edited out of this image.

It worked. In just a few days, a few interested neighbors had reached out. He plans to having one of them over for a visit. “She’s coming down to my apartment and we’re going to share a bottle of wine while standing six feet apart,” he said. “We’ll get a drink and just commiserate.”

Under normal circumstances, Vigilante and his date would probably meet at a bar. But the pandemic has limited their options—his place or hers, “or, you know, trying to break out to the roof, which I wasn’t sure how feasible that would be.”

“That’s why I feel like it was important to include my Instagram on there instead of just my phone number, so we could both get a feel for each other,” he said. “I’m probably going to be seeing this person around, regardless of how things add up. So [I want] to mitigate any sort of awkward factor and make sure everyone’s at ease and feels comfortable.”

Vigilante is happy his creativity has led to at least one connection and perhaps some smiles for his neighbors. “If not, hopefully it at least brightens some people’s days.”