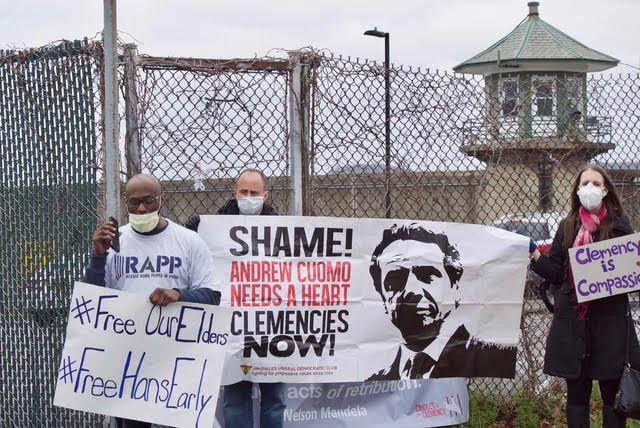 Advocates gathered in their cars or stood six feet apart beyond the fence of Sing Sing correctional facility Friday to hold a vigil for Juan Mosquero, 58, who died of the coronavirus in isolation inside the correctional facility last weekend, after complaining about loss of breath for weeks.

It wasn’t until Thursday, four days later, that a Westchester County Medical Center employee said that Mosquero had tested positive for COVID-19. Now, criminal justice advocates like the Parole Preparation Project and the Jim Owles Liberal Democratic Club are calling for Gov. Andrew Cuomo to grant emergency clemencies to the elderly and immunocompromised who are especially vulnerable.

On Friday, the campaign came to Sing Sing, with some people gathered within social distancing parameters and others watching and listening from their cars parked nearby. On Zoom, an estimated 100 people watched the vigil online. They are a part of a growing movement across the country to be heard despite public health restrictions, said David George, the assistant director of Release Aging People in Prison Campaign. Supporters, many of them elderly spouses and parents of the incarcerated, are showing up as best they can.

Compassion is what we need right now, said George, speaking outside the prison, flanked loosely by supporters wearing medical masks held signs that read, signs read “Free our elders” and “Clemency is compassion.”

“For the love of God, Governor Cuomo, we need you to act,” George said. “Mosquero is the first, but won’t be the last until you act.”

The gathering ended with attendees honking from their cars and banging drums in a noise demonstration.

Supporters said Sing Sing should follow the other prisons that are releasing the elderly, who are especially at risk for the coronavirus. In Ohio, 38 people are being considered for release, according to news reports. In California, 3,500 are being granted early release. And Illinois’ Gov. J. B. Pritzker has said that over 300 incarcerated people have recently been released in response to the virus. In New York, 900 people have been released from other penal institutions, Mayor Bill de Blasio said at a press conference.

Still, these numbers are disheartening when compared to the 2.3 million people incarcerated in the U.S., according to the Prison Policy Initiative.

But New York State prisons, including Sing Sing, have been slower to release the elderly, Allen Roskoff, the president of the Jim Owles Liberal Club said at the vigil outside the prison. He said that while Governor Cuomo has been leading the nation in coronavirus press conferences, he has fallen short when it comes to the care of those incarcerated.

“The prisons throughout this state are Petri dishes! People cannot be separated. They eat together, shower together, and sleep near each other,” Raskoff said.

“We’re talking about the elderly, grandmothers, grandfathers, and people with loved ones at home. Governor Cuomo, send them home.”

Already over 20 incarcerated people and almost 200 Department of Correction and Community Supervision staff members have tested positive for the virus, according to Release Aging People in Prison. A prison employee reportedly has also died from COVID-19. With the compounding way the virus spreads and close quarters in prison, the virus has the potential to spread to many, many more.

Ivan Calaff, who was released from Sing Sing in 2018 after being incarcerated for 13 years, was emotional as he spoke about Mosquero at the vigil.

“I think everyone here is for something– they’re for life, they’re for forgiveness,” Calaff said. “He definitely didn’t deserve this.”

“Colombia” was the affectionate nickname for Mosquero, who spoke little English, Calaff said.

“God forbid, 20 years now we have another crisis like this. People can look back and say, ‘Who did the right thing?’ And they’ll look to the leaders of New York…that New York knows what justice looks like, and it looks like mercy.”