A Calculated Risk: Going to the Park 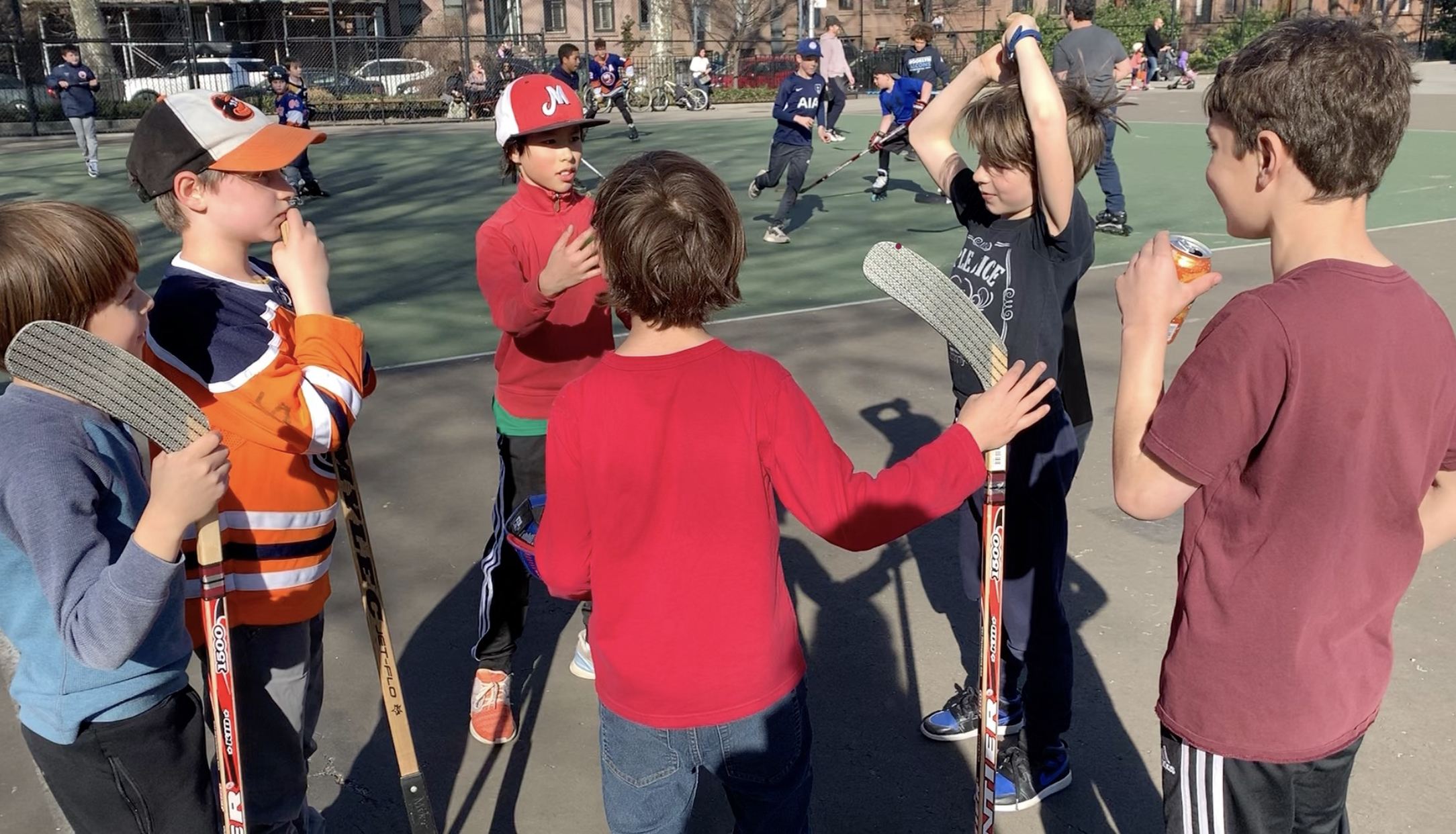 Local officials and health experts recommend New Yorkers to avoid large groups and practice “social distancing.” But there is still confusion about whether that rule applies to being outside, particularly for families fighting cabin fever.

At Brooklyn’s Carroll Park, the unseasonably warm weather attracted two full hockey games with netted goals dragged from home, two pickup basketball games, a baseball game, and dozens of people playing catch. Moms and dads stood in circles chatting, some drinking adult beverages in concealed–and not so concealed–containers. Had you just woken up from a coma, you’d think it was the vision of a perfect spring day.

But past the whoops and clacks of sticks and bats, another sound was audible: parents nervously questioning whether they should be there at all. “I’m deeply conflicted that we are here,” said Ben Zimmerman, a lawyer from Brooklyn, while his young son played street hockey behind him. “But I also don’t want to kill my family by being cooped up with them at home.”

This was indeed the quandary: How to balance worry for your children’s safety with concern for your own sanity.

“This is so much fun,” said Sara Rutkiwski as she watched the kids run and scream before landing in a heap at her feet. “But at the same time, is it responsible? We’re outside, right?”

Others, like mother of twin boys Chelsea Dodger said, “I feel good that I am close to people here. If nothing else we are a community.” Dodger is also a counselor who specializes in trauma and said that the constant barrage of daily—and even hourly— news  is too much to process. “The level of anxiety I have about it will not keep me safe. So I’m going to do what it takes to make me feel like my life is still going on while not feeling like I am a douchebag by giving it to other people.”

Still, others adopted a more fatalistic approach. “We might all already have it,” said John T., a little league coach, who was forced to cancel his team’s practice the day before. “As long as we’re outside, I feel better.” Another dad said he was “fairly certain” he’d been exposed after flying back and forth from California twice in the last two weeks.

The confusion is understandable since public schools are still open, but some extracurricular activities are cancelled. Not only are parents making it up as they go, health officials guidelines are changing by the hour.

Mayor de Blasio’s issued a state of emergency on Friday March 14th, but the announcement didn’t offer parents concrete advice. The city banned any events over 500 people but didn’t offer advice for smaller gatherings.  “To curb this pandemic, we need greater social distancing,” said the mayor. “We’re therefore cancelling large gatherings and implementing strict reductions on smaller ones.” There was no clarification as to what those restrictions are.

De Blasio said, “This isn’t the first set of restrictions we’ve handed down, and it will not be the last. As we learn more about COVID-19 and how it spreads, we’ll continue taking steps to keep New Yorkers safe.”

Families in the park believe school closures are imminent. On this Saturday, they weighed the risk and decided one more game and a day in the sunshine was worth it.

But at the end of the day, even that was called into question. As dusk descended and the park emptied, one mother said walking away, “I don’t know. Maybe this was a bad idea.”

Top image: Brooklyn parks were filled with kids on Saturday. Their parents were unsure if playing outside met “social distancing” protocols.