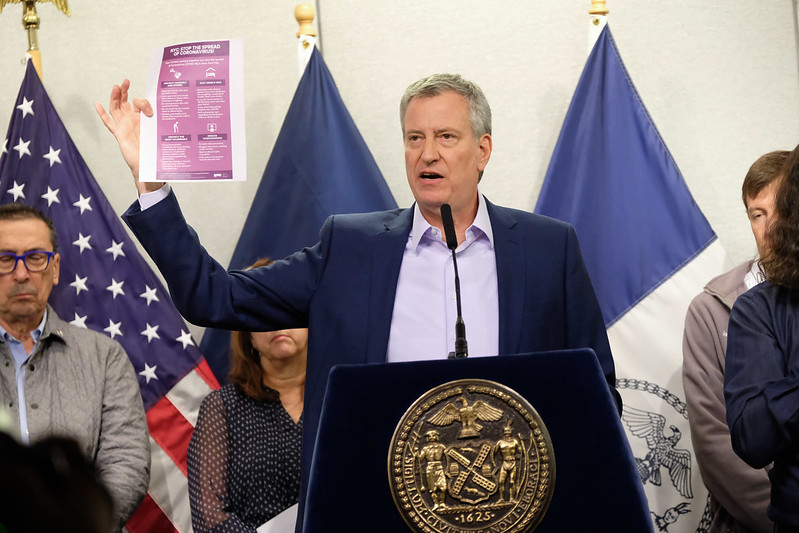 He repeated his refrain of recent days, that the three pillars of New York City that are most important to keep operating are the health care system, the mass transit system and the schools. “There are a lot of other things we can do without,” he said, “but those three things are absolutely critical to preserve.”

Although other cities are closing schools, de Blasio reiterated that keeping children home could potentially do more harm than good for the city’s residents. Many New York children depend on the schools for 1-2 meals that they might not get at home. Additionally, the mayor said children not showing symptoms themselves could contaminate more vulnerable people in their families and communities if they stay home from school.

While school is still in session, de Blasio cited a number of other steps the city is taking in response to the threat of the COVID-19, including financial assistance for small businesses, fewer in-person interviews for those seeking food stamps and unemployment benefits, and resources for people to get reliable information and reassuring counseling.

Concerns from callers were also raised about access to testing, which has slowly trickled in due the federal government’s response. Before, the city could only test 60 people a day, with many New Yorkers being turned away by health care providers and learning that they didn’t fit the CDC’s narrow guidelines.

The mayor also welcomed a federal action that would make virus tests more available and exact. Initially a bitter critic of federal rules that hampered testing, he said the city will now be able to test thousands of people a day, and get their test results the same day, giving the city a more comprehensive overview of where the virus has spread.

“If you start to feel sick, go home and stay home,” de Blasio said. “If you’re getting worse call your doctor.”

De Blasio said it’s going to take a city-wide effort to tackle coronavirus concerns. One of the most important things that residents can do is stay away from vulnerable populations, especially if they’re experiencing symptoms of the coronavirus or have been in direct contact with someone who has tested positive.

The mayor also urged people to read official reports online from the city through Twitter and www.nyc.gov, and to call 311 with specific questions. He said text updates from the city are available by texting “COVID” to 692692. People who are especially worried or anxious can talk to a wellness counselor 24/7 by calling 888-NYC-WELL.

Mayor de Blasio urged city residents to pull together the same way the city has during recent crises, like 9/11 and Superstorm Sandy.  He left with a warning that it might take several months for the city to return to normalcy.