Citymeals Packs a Year’s Worth in Weeks 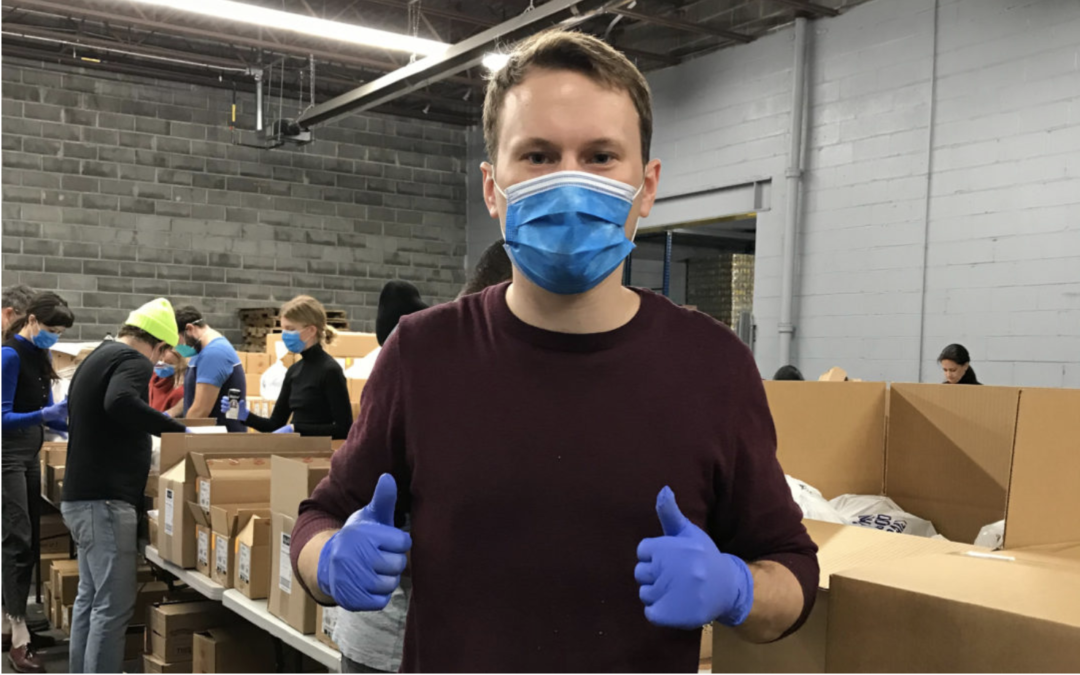 Andrew Wilcox at the Citymeals warehouse in the Bronx.

Andrew Wilcox was lying in bed, unable to sleep.

As he scrolled through social media, a friend’s post on Instagram caught his attention. It was an image of people in a huge warehouse, packing meals in boxes. Citymeals on Wheels needed volunteers to help pack meals for the city’s most vulnerable residents, the post explained.

He sent an email at around 2 a.m. and finally got some sleep. When he woke up at 9 a.m., a reply was waiting in his inbox. A few minutes later, Wilcox, 30, who recently worked as a VP of operations at VICE News, was out the door to drive up to the Bronx.

“It was one of those funny things where social media had a really immediate impact,” he said. Wilcox started sharing his own experiences on social media. “I got a ton of interest and I ended up bringing a friend the next day, actually.”

In less than a month, Citymeals has prepped and delivered nearly a full year’s worth of emergency meals with the help of about 2,500 volunteers donating over 9,750 hours of support — not only providing meals to homebound elderly residents but giving New Yorkers a sense of agency and purpose in uncertain times.

The longstanding meal delivery nonprofit has already distributed 200,000 emergency shelf-stable meals to older New Yorkers at their homes or at senior centers, and is on track to pack and deliver another 250,000 as of April 3, nearly totaling the 500,000 they prepare in a typical year.

Another volunteer, freelance video producer Megan Robertson, got an email from Citymeals a few weeks ago asking for more volunteers. She spent the next six days in a row packing meals. The whole operation, of warehouse workers, temporary workers and volunteers working seamlessly together, impressed Robertson and gave her a feeling of optimism.

“Especially for those of us who are underemployed or unemployed right now, I think that there’s a huge benefit to being able to do it,” Robertson said. “It helps with your self-esteem. It helps with feeling like you’re part of something. Something that you’ve put maybe eight hours of effort into is going to have a lasting effect for seniors in New York.”

Like many New Yorkers, Robertson has found herself without work during the crisis. Spending time packing meals, she said, provided a bit of stress relief for her by providing a safe way to contribute her time helping others.

Wilcox hopes to continue working with Citymeals throughout the crisis. He has a pickup truck and would like to also do deliveries, just like his grandfather used to do for Meals on Wheels years ago. “What else am I gonna do?” he said over the phone, “I have a car. I’ve got free time. I’m able-bodied.”

Wilcox had previously volunteered for parks in Brooklyn, but he — and others he is working alongside — will devote more time to Citymeals after the coronavirus crisis.

“What I’m hoping comes out of this is that a lot of the people who’ve been exposed to Meals on Wheels and similar volunteer opportunities in this time decide to make it a long-term engagement,” Wilcox said.