De Blasio Declares State of Emergency for NYC, Warns Things Will Get Worse 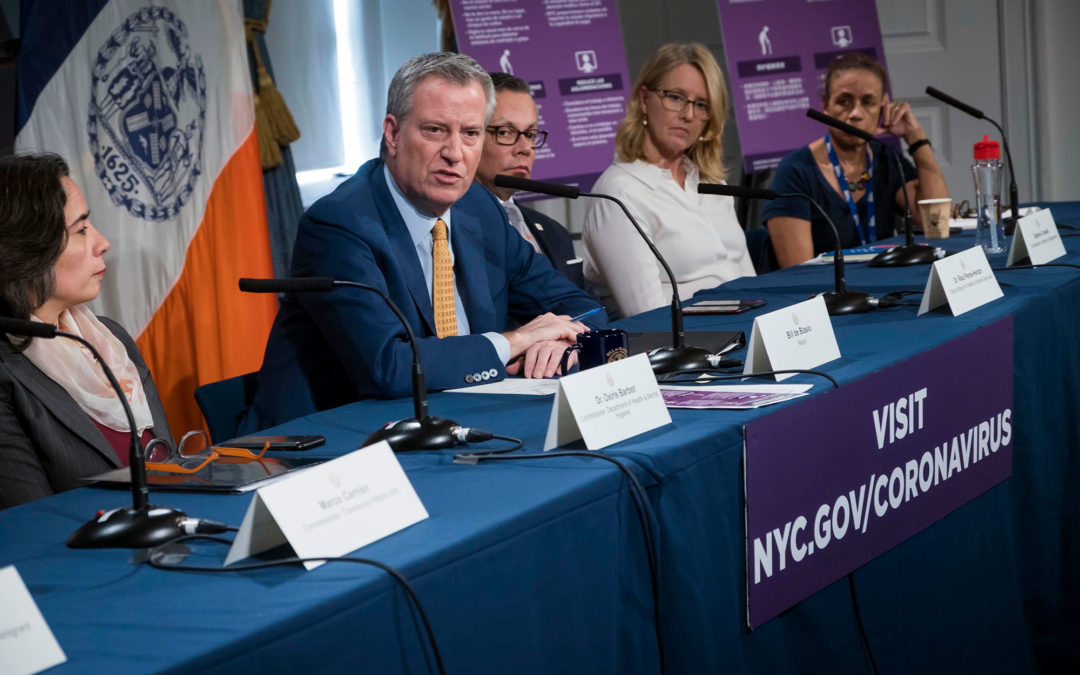 Mayor Bill de Blasio declared a state of emergency for New York City on Thursday after COVID-19 cases almost doubled to 95 in one day.

In a press conference held at City Hall, de Blasio briefed the public on changes coming to the city in a health crisis he said he believes could last six or more months. The state of emergency declared has allowed de Blasio to ban events of 500 people or more, meaning Broadway is now closed until the end of the month. His main goal currently is to keep schools, mass transit and the healthcare system functioning no matter what, something both he and state officials agree on.

“Yesterday morning seems like a long time ago,” said de Blasio. “We got a lot of information in the course of a day yesterday and a lot changed then, then last night it just seemed the world turned upside down in the course of just a few hours.”

As of Thursday’s press conference, there were 25 cases in Manhattan, 24 in Brooklyn, 17 in Queens, 10 in the Bronx and 5 in Staten Island. Only 22 people with COVID-19 are hospitalized. The rest are in isolation in their homes.

Even though a state of emergency has been declared, New York City public schools will remain open. PSAL sports, parent teacher conferences, PTA meetings, school recitals and plays and assemblies will be moved online or cancelled.

Two schools, the Laboratory School of Finance and Technology and the South Bronx Preparatory: A College Board School, in the Bronx were closed Thursday after a student claimed to have the virus. The mayor said the City has not confirmed that the student has COVID-19 but should have confirmation soon..

The Queens Borough President race is still scheduled for March 24. De Blasio said that preserving our democracy is extremely important but that door-to-door canvassing should stop immediately. Also, the Mayor’s Office will reach out to candidates to discuss further plans around campaigning.

De Blasio has also authorized 10% of the city’s workforce, 35,000 people, to work from home “in short order.” Another 20% of the city’s employees will be working on a staggered schedule. This puts around 100,000 workers on modified schedules.

Around 550 outreach workers have been trained in a protocol for discussing the virus with homeless folks. Over 770 homeless New Yorkers have been spoken to about the virus’ symptoms and checked. None have yet been referred to healthcare providers for COVID-19 symptoms.

When asked about a potential mass quarantine for New York City, the mayor is modelling and weighing different scenarios and different actions for the virus but downplayed the possibility of a quarantine.

“I think we’ll be at 1,000 cases next week,” said de Blasio. “We are going to lose some of our fellow New Yorkers. That, unfortunately, is inevitable.”